I Was there at the Beginning 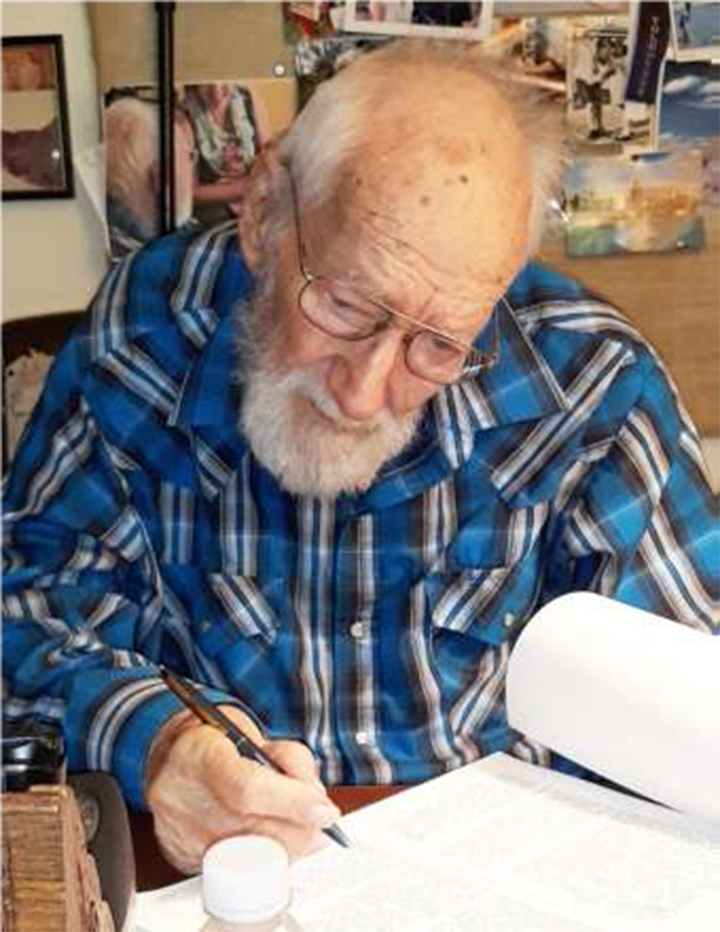 Mr. Paul R. Nixon peruses a document at his home in Fredericksburg, Texas, USA. (Photo courtesy of Mr. Nixon)Economics is a vital part ofsuccessful farming. We discussed therotation of crops, and the economics ofvarious crops. We made estimates of costs of various steps involved incosts of various steps involved ingrowing and marketing of a crop orlivestock. This included dealing with abank, whether asking for a cash advanceor a longer term loan. We had to makeproper conversions in various systems ofweights and measures. Another big part was the understanding of the growth processes of plants and animals. We could barelyplants and animals. We could barelytouch the surface of this vast subject. Ihope future students of a short course willkeep their notes and be prompted tof u r t h e r s t u d y. B e c a u s e o f t i m elimitations, we hardly dwelt on subjectslike soils and weather, let alone anysubjects worthy of Ph.D. dissertations.
My personal interest was in farmimplements, particularly the school'sFarmall tractor. I enjoyed tinkering withit, supposedly improving the timing ofengine performance. We had a new Fordpickup truck to use on the job, and one ofthe other two trainees ran it off the muddyroad into a bank. I think I was theprincipal's pet because, after that, he saidthat I was to be the only one to drive it.
I had brought my 3030 Winchesterrifle to school with me and used it to killmeat for the table and to scare off gamethat raided our field crops.Thinking back, I realise howvaluable my six months at Egerton werein shaping my career. My first job was atthe Menengai Estates wheat fields. I usedwhat I learned at Egerton in duties suchas keeping the threshers on combineharvesters in running order.
Next I went to work for the KenyaSoil Conservation Service (KSCS). Twoof my special friends in the KSCS wereOnesmus Musyoki, who went on to anoutstanding career in soil conservation inUkambani, and Peter Koinange, the sonof a Kikuyu paramount chief. Sometimeson walks during off-duty hours I enjoyedwonderful discussions with these menwho were secondary school graduates,which was not common in those days,and we all had a love for the land. Theywere several years older than I. We oftentalked about the need for preventing theland's deterioration by erosion fromrainfall.
Another one of the people I workedwith was a rod man on the surveyingteam, who was about my age. He and Ialso had many discussions, with each ofus vigorously arguing our point of view.He pointed out the inequities in thetreatment of the native people and the unfairness of settlers' privileges, while Iunfairness of settlers' privileges, while Imaintained the point of view of somewazungu. I sincerely regret that, as youngas I was, I did not have a broader, morebalanced understanding at the time.
I was an American citizen by birth,and registered for the draft when I turned18, but was not called to service untilover two and a half years later, when Iwas working for the KSCS. I worked as asurveyor in the US Army AviationEngineers battalion, which was buildingand maintaining airfields in Egypt andArabia.
At the end of World War II, I went tonight school at Brooklyn High School inNew York to finish my secondarytraining, and was accepted to college.Iowa State University was recognised asthe premier agricultural traininginstitution, so that's where I went for myBachelor's degree. After working for theUSDA Soil Conservation Service for twoyears, I returned to Iowa State for aM a s t e r ' s d e g r e e i n a g r i c u l t u r a lengineering. Later in my career, I had theopportunity to go to Stanford Universityfor a Master's degree in hydrology.
The first half of my career, whichwas in California, was in watermanagement engineering, and the lasthalf was in Texas, where I worked inremote sensing using aircraft andsatellite data. In California, my principalduties were as leader of a court-orderedmulti-agency study of ground waterrecharge in the Santa Ynez River lowerbasin. A large reservoir had been built onone side of a mountain range, and atunnel dug to deliver water to counties onthe other side. When I delivered the finalreport of the study's findings, I hadworked myself out of a job.
In Texas, one activity was asPrincipal Investigator of the HeatCapacity Mapping Mission of theNational Aeronautics and SpaceAdministration (NASA), using satellitedata. Then, during the last several yearsof my career, I was at the USDASubtropical Research Labs as researchleader, where we were developing techniques that related to ground, aircrafttechniques that related to ground, aircraftand satellite information, and theirapplication to soils, climate, andcropping practices and problems. Thisincluded developing procedures for thecoordinate use of satellite data systems.LANDSAT, NOAA-7, and GOES werestate of the art at the time.
I went back to Kenya sixty yearsafter leaving, found a population seventimes what it was when I was there, andwas pleased to see the changes that hadtaken place, even sky scrapers in Nairobi.What progress! Of course it also broughtproblems, starting with a growingpopulation's strain on natural resources.
Compare the Kenya of the old dayswith today's where it seems everybody iswearing shoes and carrying phones. Atour time, in the interior, there were nomeans of wheeled transport, roads ortowns; there were digging sticks insteadof jembes, no working for wages, nomethod of writing or numbering systems,no standard weights or measures, and nocalendar. Kenya has come a long waysince that period of history.
Now there is technology. Africanshave not only grasped but alsochampioned some of the technologicalinnovations. Kenya almost skipped overlandline phones and went straight tomobile, for example. All this speaks wellfor an ambitious people.
There's been such a big step ineducation. I'm thrilled that Egerton hasdeveloped into such an outstandinguniversity, and it is due in large part to anexcellent faculty and bright studentsdriven by ambition who decide to cometo it.
Egerton University's graduands of2019 will spearhead Kenya's future. Ihope that every one of you, in whateveryou do and in whatever venue, will bringbenefit to the people of Kenya andbeyond, thereby bestowing honour upon Egerton University.