On January 8 2022, the Egerton community worldwide paused for two hours to pay tribute and remember in prayers the late Mahedi (Medi) Gilani. Mr. Gilani passed away on Saturday January 1, 2022, and was laid to rest in Nairobi. 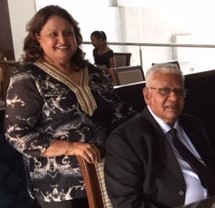 The late Mahedi Gilani and wife Roshy GilanThe special event conducted through Zoom, was prompted by the prevailing Covid-19 pandemic which did not afford an opportunity for in person attendance. The people whose lives Medi so profoundly impacted came together from across the diverse parts of the globe to pay homage to a man who could only be described as a personified humility. Medi held a special place in the lives of Egertonians of the time, especially those that attended the then Egerton College in the 60s and 70s. It was therefore gratifying to see a collective assembly, all from past and present, to remember the benefactor of the old days.

The memorial was streamed live from Canada and officiated by alumnus Mr. Sadru Nazarali (Agrology class of 1965) who has in his own way cut a niche as the Egerton Alumni ambassador worldwide as well as among the Egertonians@Egerton dream team. The event drew Alumni from diverse corners of the globe; from Canada, the USA, the UK, France, Botswana, Kenya and Tanzania; and was gratefully graced by the presence of Kenya’s Cabinet Secretary for Foreign Affairs, Ambassador Raychelle Omamo, together with members of the larger Omamo family. Also in attendance was the Aga Khan Development Network Representative in Kenya, Ambassador Dr. Azim Lakhani. Egerton University was represented by the Chairman of the University Council, Ambassador Dr. Hukka Wario and the Vice Chancellor, Prof. Isaac Kibwage. In total, 126 people attended this virtual event.

It is because of Medi’s love for others and his stature which compelled such an assembly of people to get together and condole with his family.  Notable was the inter-generational diversity spanning six decades of Egertonians with varied countries of origin. To name a few, from the early class of 1962 was Mr Perminder (Pindi) Singh Tamana from Twickenham UK  (formerly District Agricultural Officer for Mombasa and Life Governor of the Agricultural Society of Kenya (ASK)), Dr. Mizra Meghji from Atlanta,  USA, and Dr. Taher Lookmanjee of Edmonton, Canada. Also in attendance were some Egerton alumni who had the just graduated in December 2021.

The common strand running through all the tributes was the magnitude of Medi’s humanity. The generosity shown to the first batch of Aga Khan Foundation sponsored students from then newly independent East African Countries of Tanzania, Kenya and Uganda (a program created to replace skills void left by exiting colonial agriculture experts) is still remembered with gratitude. 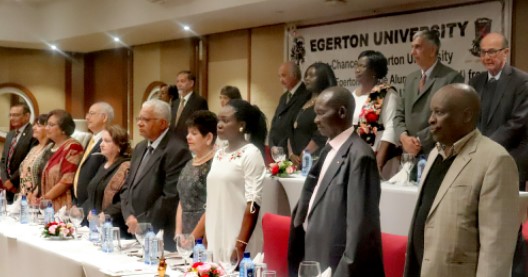 Medi Gilani (front row) fifth from right at the Egertonians@Egerton banquet at the Concord, August 20th 2019

The welcome and courtesy shown to clients at his butchery amplified Medi's rare quality in care and love towards the people he came in contact with. Indeed, his good nature endeared him to the Egerton College community where for years, the quality beef supplied to the Egerton College Mess came from his butchery. It is therefore not a wonder that Gilani's Supermarket, which he started in 1972, is still thriving, offering quality service with unmatched customer care, and notably holds the singular distinction as the longest operating supermarket in Kenya.

Concluding the eulogies, in her tribute, Cabinet Secretary Raychelle Omamo, whose father Dr. William Odongo Omamo (Kaliech), was the first African Principal of the College in the mid sixties, shared fond memories of the friendship that blossomed during this time. She recalled how, as a young girl, she cherished the feeling of family she got every time she accompanied her father on visits to the Gilani’s. Medi’s life exemplified humility, service and adherence to quality. These three virtues were clearly discernible from the many tributes offered.

During this memorial, we were also joined online by Mrs. Joice Grace Achola Omamo (who turned 92 recently), the wife of our beloved late Principal, Dr.William Odongo Omamo. Mrs. Omamo also sent her condolence message which was received towards the end of the memorial.

The experience of celebrating a multi-faith global memorial with tributes from 19 cities in Kenya, Tanzania, Canada, USA, Botswana, England and a few others was quite memorable for me, perhaps a once in a lifetime event, and maybe the first one in Egerton’s history. What stood out was the sentiments within the renditions as presented by various faith groups, illustrating the harmony of shared tradition of one humanity. The prayer services included a recitation from the Holy Quran by Naseem Machooka (Kenya) from the first female class admitted to Egerton College in 1968. A Christian prayer and reading was presented by Redemptor Mutinda (Kenya) and Octavia Khumo (Botswana), representing graduating classes of 2020 and 2021 respectively. Pindi Tamana (UK) did the Sikh/Hindu prayer readings. Ginan and Quasida hymns, an Ismaili Muslim tradition, were sung by Mohamad Mitha (Toronto - Gujrati Ginan’s), Fahima Khudadad (Edmonton - Afghani Persian Quasida), and Mazen Kassim Edmonton (Syrian Arab Quasida). The prayers’ part ended with Quaran recitation by Dr. Taher Lookmajee (62) Edmonton.

As a true Kenyan, Mahedi never left his country, and the Gilani family created a business empire with the moral conscious, including a foundation to support the street children of Nakuru.

His last business act was to sell his business to a Kenyan, and we heard a great tribute from Sam who, together with his brother and business partner Patrick, bought Gilani butchery, now operating as Uplands Butchery but maintaining the same quality of service.

Medi’s memorial presented us with a rare opportunity to cement the strong sense of brotherhood in the Egerton Alumni community and an important call to espouse his virtues of humility and service as an important step towards building cross-cultural bridges for the advancement of peace, development and humanity.

This is the rare gem that was Mahedi Gilani and so, when Mark Anthony (in Shakespeare's Julius Ceaser) intones about Julius Caesar thus ‘the bad that men do lives after them, the good is oft interred with their bones...,’ it becomes apparent that he had not met Medi Gilani.

This email address is being protected from spambots. You need JavaScript enabled to view it.